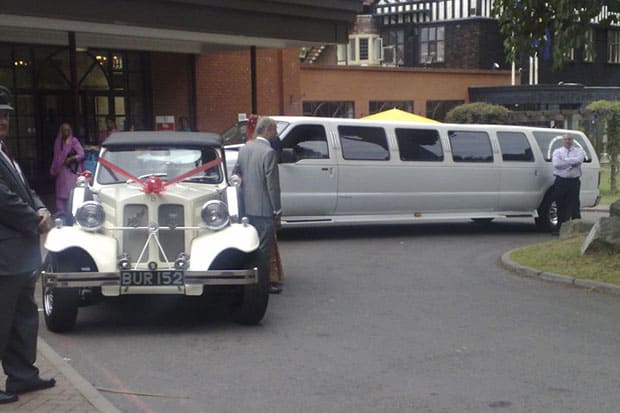 The Universal Marriage, named after the Vedas, is known as the Vedic Marriage (holy book). However, with their distinct traditions, there are regional variations.

Get My Quote
View Cars

Hindu weddings are usually a lengthy procedure with many ceremonies that could take several days to perform. Each ceremony and ritual in a Hindu wedding are of great spiritual and philosophical importance. There is a tremendous Hindu Marriage ceremony that is known as the wedding ritual. This ceremony is performed following the Hindu wedding, and the distribution of alms and sweets accompanies it. Throughout the entire world, Hindus follow these ancient traditions and continue on these rituals of weddings that are unique amongst all those in the western world.

The Hindu Wedding Limo is the perfect way to get your guests from one place to another. Our fleet of luxury vehicles are available for hire in Coventry, Warwick to London, Birmingham and Manchester. We offer chauffeur driven cars with professional drivers who will take care of all the arrangements on the day so you can enjoy your day without any worries.

Our services include airport transfers, weddings, proms and other special occasions. We also have a range of limousines that come in different sizes and styles to suit your needs. Whether it’s just two people or more than 20, we have something for everyone! Book now for our best prices!

Contact our team today for more information on how we can help make your big day even better!

Hindu marriages are considered to be very sacred and essential for both the bride and the groom. The Hindu Marriage Ceremony is mainly performed within the premises of a temple or a home. The ceremonies are performed following a week to one month. After the Hindu Marriage Ceremony, the guests have gathered outside the house, accompanied by a lot of discussion and dancing. The guests are asked to give their blessings to the new family and the bride and groom. The bride and groom then take the gourds and go to their new home, where they spend the next seven years in peace and bliss.

Hindu marriages are considered to be auspicious and blessed with numerous divine and emotional rewards. Hindu weddings are not just about a person getting married to another person. Hindu Marriage Ceremony is the most important of these, and the couple spends their whole life in peace and bliss.

Hindu Marriage Ceremony is something that happens in both families. After the wedding couple takes a bath in water and feeds each other with honey from different parts of the earth, it is believed that. This is followed by a special ceremony in which the bride’s parents come forward to take care of her. Later on, after the ceremony, the priest performs different Hindu rituals to please the bride.

The ceremony of the Hindu Wedding

Hindu Wedding Ceremony is an extraordinary and grand ceremony that takes place in India. The Lord’s blessings are given to the bride through this ceremony, and the wedding ceremony is dedicated to celebrating a sacred event.

The groom arrives in a limo with his wedding party (baarat) and the bride and her family receive it (milni). After their mother has already done so (aarati), some brides salute their groom by garlanding him (jayamala) and he may choose to reciprocate.